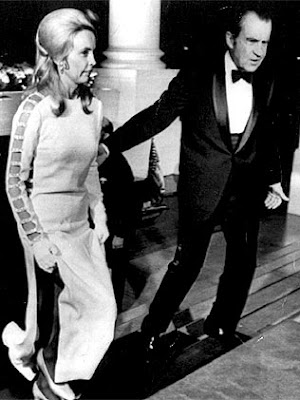 Lady Sonia McMahon was the wife of Sir William McMahon, Prime Minister (1971 to 1972).
In spite of a long and active life as a socialite, political wife and philanthropist, the thing most Australians remember about Sonia McMahon is the white dress she wore to lunch at the White House with the Nixons in 1971.

Split to the armpit and revealing her long elegant limbs and model figure, the dress caused quite a stir in press the world around and much was made of her daring modernity. The fashion editor of the Washington Post described it as "absolutely smashing. I think the dress is a breakthrough for fashion and a blow for women's liberation."
Posted by Dress in the Press at 04:24

Dress in the Press
Melbourne, Victoria, Australia
Female politicians and women in positions of influence: what do they wear and how does this affect how they are portrayed by the media?